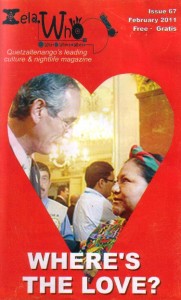 Regarding the investment climate, the Ambassador raised the June 21 incident in which indigenous protesters opposed to the construction of a cement plant killed a community leader who had favored the project (septel). Colom said that former presidential candidate and Nobel Peace Prize Laureate Rigoberta Menchu was at least partly responsible for inciting local opposition to the proposed plant. She had told Colom of her involvement and that she would continue to encourage indigenous people to protect their land. Colom said he had responded by saying that encouraging indigenous people to protect their land was acceptable, but that killing was not and that the GOG would act to enforce the law.

Colom said Menchu was a “fabrication” of French anthropologist and author Elizabeth Burgos, who wrote the book, “I, Rigoberta Menchu,” that brought Menchu to international attention. Colom said that Menchu is widely disliked by Guatemalan indigenous people, as demonstrated by her poor showing in the 2007 presidential election. He said he was present at a 1997 ceremony at which Mayan leaders formally pardoned Menchu for “betraying her people.”

Observing that Menchu was unfit for the presidency, Colom said he had advised her against running, saying she should not risk sullying her reputation in politics. Regarding the polemics about the circumstances in which Menchu learned Spanish, Colom said he knew the truth – his older sister Yolanda, while a guerrilla leader, taught Menchu “up in the mountains.” Colom said his venerable indigenous “teacher” had once commented to him that “no indigenous person would ever be president of Guatemala”due to the deep rifts among Guatemala´s 22 Mayan indigenous groups.

El Commissioner Carlos Castresana of the International Commmision Against Impunity in Guatemala (CICIG) is very demmanding.

Colom estuvo de acuerdo con que el ministro Luis Ferrate should be more measured in his public statements, and noted he had regular, sharp disagreements with other cabinet member.