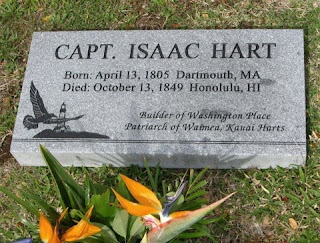 Is your great grandmother Edwina Minnie Nihoa Hart Schuman? If so, then your grandmother* is Adele [Mami]? Then we’re related!
My grandmother is Ottillia Hart, the youngest of eight Hart children, whose parents were Isaac Kapuniai Hart & Elizabeth Wond. Edwina was the eldest of the 8 Hart children. They’re all in my Family Tree on Genealogy.com, and you’re welcome to browse and gather information if you’d like to. Ottillia married Oliver Robinson, and, together, they had 10 children. My mother, Marie Keikilani Robinson, was the third child. She married Edwin K. Crowell (my father), who became the Chief of Police for the Island of Kauai.
Capt. Isaac S. Hart, a sea captain, who frequented the ports of Hawaii, eventually settled in Honolulu and became a naturalized citizen of the Kingdom of Hawaii. He was an architect and builder, and built two homes that figured prominently in the history of hawaii. Of course, this was not his intention. Both were completed in 1846.
One house was built for the governor of Oahu, Gov. Kekuanao’a, who wanted a beautiful house for his niece, Princess Kamamalu. However, King Kamehameha III, who was moving back Honolulu from Maui, wanted the most beautiful house in all of Honolulu for his palace. Just so happens that this was the house he desired, so it became the first palace, later to be named Iolani Palace. It remained the palace for the Kings that followed, who were Kamehameha IV, Kamehameha V, King Lunalilo, and, finally, King Kalakaua, who had it razed to make way for the current Iolani Palace, which still stands today!
The second house, which also still stands today, was named “Washington Place” after the father of our country, George Washington. He built it for another sea captain, John Dominis, who’s ship was lost at sea on his voyage to the Orient to purchase furniture for the house. It eventually became the home of our last monarch, Queen Liliuokalani, who lived there for 55 years. After her passing, it became the official residence of the Governor of Hawaii, and remains so today.
We recently located Capt. Isaac Hart’s grave in Oahu Cemetery, with the help of the cemetery’s office staff. He died on October 13, 1849, and was buried the same day. There was no head stone, so I got some of my cousins together, and we ordered a stone plaque for him. I then invited our relatives to come and celebrate with us. On April 13th of this year, we all gathered at Oahu Cemetery to see his head stone and to celebrate his 205th birthday.
*Adela era mi bisabuela

This entry was posted on sábado, junio 12th, 2010 at 12:39 pm and is filed under Adela de Morales, Mami. You can follow any comments to this entry through the RSS 2.0 feed. Both comments and pings are currently closed.