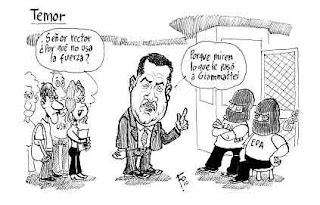 If someone has a gun and is trying to kill you, it would be reasonable to shoot back with your own gun. El Dalai Lama, Mayo 15, 2001, en la Educating Heart Summit, en Portland, Oregon.

Unfortunately, it happens that the need to render the aggressor incapable of causing harm sometimes involves taking his life. In this case, the fatal outcome is attributable to the aggressor whose actions brought it about, even though he may not be morally responsible because of a lack of the use of reason. Karol Wojtila, Evangelium Vitae, 1995.

Among the many misdeeds of the British rule in India, history will look upon the act of depriving a whole nation of arms, as the blackest. Mahatma Gandhi.

The average man’s love of liberty is nine-tenths imaginary. It takes a special sort of man to understand and enjoy liberty and he is usually an outlaw in democratic societies. H.L. Mencken

Those who beat their swords into plowshares will plow for those who don’t. Thomas Jefferson.

The best we can hope for concerning the people at large is that they be properly armed. Alexander Hamilton.

Firearms stand next in importance to the Constitution itself. They are the American people’s liberty, teeth and keystone under independence. The church, the plow, the prairie wagon and citizens’ firearms are indelibly related. From the hour the pilgrims landed to the present day, events, occurrences and tendencies prove that, to ensure peace, security and happiness, the rifle and pistol are equally indispensable. Every corner of this land knows firearms, and more than 99 and 99/100 percent of them by their silence indicate that they are in safe and sane hands. The very atmosphere of firearms anywhere and everywhere restrains evil influence. They deserve a place of honor with all that’s good. When firearms go, all goes. We need them every hour. George Washington.

How a politician stands on the Second Amendment tells you how he or she views you as an individual… as a trustworthy and productive citizen, or as part of an unruly crowd that needs to be lorded over, controlled, supervised, and taken care of. Representative Suzanna Gratia Hupp (TX).

A fear of weapons is a sign of retarded sexual and emotional maturity. Sigmund Freud.

If those states which did not have right-to-carry concealed gun provisions had adopted them in 1992, approximately 1,570 murders; 4,177 rapes; and over 60,000 aggravate assaults would have been avoided yearly. Professor John Lott, en http://deepwaterweb.com/gunstudy.htm

That rifle on the wall of the labourer’s cottage or working class flat is the symbol of democracy. It is our job to see that it stays there. George Orwell.

A system of licensing and registration is the perfect device to deny gun ownership to the bourgeoisie. Vladimir Ilyich Lenin