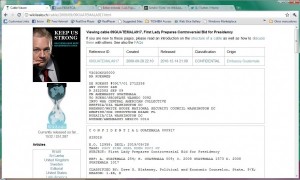 Although she has not publicly stated her intentions, it is clear that First Lady Sandra Torres de Colom intends to run for the Guatemalan Presidency in 2011.  Torres, who is to the left of her husband, President Alvaro Colom, is a Controversial Figure.  She is the most able manager in the government, and also the most abrasive.  Many poor, rural Guatemalans, ignored by previous governments, are grateful for her Conditional Cash Transfer ands other social programs.  Many middle- and upper-class urban voters tend to see Torres as a radical populist. Her sex and middle class privincial origins reinforce the upper class´distrust to her. The Guatemalan Constitution bars presidential family members from running but Torres is likely to challenge that obstacle.  her efforts to do so would generate considerable controversy, given the politization and corruption in judicial institutions.  The First Lady´s likely candidacy means that the current GOG is balancing governance with preparaing for the 2011 campaign.

Colom has also told the Amabassador that Guatemala´s deep-rooted poverty, violence and impunity could only be resolved by the continuity of having the same party in power for two to three presidential  terms.

Her abrassivenes has lost her some allies, and we suspect that her subordinates are reluctant to giver her or the public bad news.

[The dramatic expansion of My Family Progresses] has been funded largely by transfers from other government programs including the Ministries of Health, Education, and Government.

Following Colom´s inauguration, the Firs Lady screened potential cabinet officers, and continues to query and chastise cabinet officers during her regular participation in cabinet meetings. Several former cbinet officers and cabinet candidates who declined positions privately cited her abrasive treatment as the reason they left government or did not join it in the first place.

According to UNE Deputy Christian Boussinot, Torres´insistence in taking the governing party further to the left is already dividing it, and led UNE President of Congress Roberto Alejos to Publicly muse about leaving the party.  Torres´inner circle of former guerrillas such as Peace Comissioner Orlando Blanco and Presidential Advisor Jorge Ismael Soto García (aka “Pablo Monsanto” who was implicated in planningthe 1968 murder of U.S. Ambassador John Gordon Mein), as well as her close relationship with Cuban Ambassador Omar Morales (per xxxxxxxxxxx, STRICTLY PROTECTED), stir anxieties on the right end of the political spectrum.  (Note: Conservative Presidents Arzu and Berger also had ex-guerrilla advisers.)

A new Constitutional Court likely to be sympathetic to the governing UNE party will be seated in April 2011, just in time to rule on Torres´candidacy.

It is not clear that the President and the First Lady are legally married.

An economic advisor to Torres told Emboffs that Torres is aware that she is a polarizing figure, and that if her poll numbers do not quickly improve as the election approaches, she might resign herserlf to being the power behind the throne, and let someone else run in her stead.  He said that so far there is no consensus on who that might be, or whom Torres might pick as her running mate.

This entry was posted on miércoles, diciembre 15th, 2010 at 12:57 pm and is filed under Alvaro Colom, elecciones, sandra torres. You can follow any comments to this entry through the RSS 2.0 feed. Both comments and pings are currently closed.