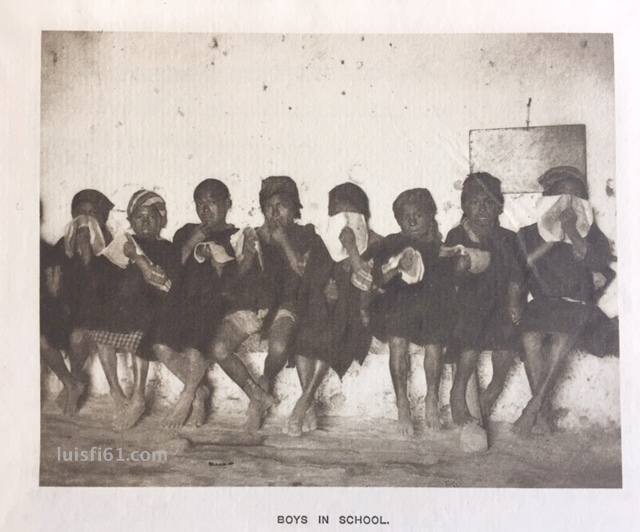 Esto nos cuentan los Maudslay acerca de una escuela en San Antonio Palopó: Next morning we were awakened by the arrival of the school-boys, whose class-room was next door. each little fellow trotted up the steps with a little bundle of wood faggots on his back, which he deposited outside the door, and then took his seat on the wooden bench within, They were the cutest little creatures imaginable, dressed just like their fathers; but their strange black garments were in indifferent repair, and the red-and-white handkerchiefs round their heads looked as though they might have been handed down fro father to son…they…buried their faces in the yellow-covered books, and never stirred for three whole hours! during which time the school master seated outside the school.room and chatted…Perhaps after all the master`s absence or presence did not make much difference, for he owned to us that he could not speak the Indian language and his pupils knew no Spanish.

There is a school-house in every village, and the government really seems to do its best to give the Indians some education, but the difficulties are great.  Sometimes it is the Indian fathers who refuse to send their children to school, fearing that if they learn to read and write and speak Spanish they will be employed bay the Cabildo ant a starvation salary and never find time to plant their milpas; at other times it is the difficulty of finding competent and trustworthy teachers.   Indeed, I heard of one case in which it was not until the schoolmaster had been some years in office that the Jefe Politico discovered that the man could  neither read nor write.

This entry was posted on domingo, septiembre 25th, 2016 at 10:45 am and is filed under A Glimpse at Guatemala, Historia, nostalgia. You can follow any comments to this entry through the RSS 2.0 feed. Both comments and pings are currently closed.